—————————
Kanji system is the sole survivor of ancient civilizations’ hieroglyph scripts.
As each character of ancient Egyptian hieroglyph had its own meaning in itself, each of Kanji indicates a unique meaning.
That is different than the alphabetical system, that was created in ancient Phoenicia and spread worldwide throughout the history.
“A”, “B”, and “C” have no meaning in themselves but indicate pronunciations only.
On the other hand “英 (Ei)”, “美(Bi)”, and “死(Shi)” have, for example, clear meanings. They roughly mean “wisdom”, “beauty”, and “death”.
Another aspect that differentiates Kanji from alphabet is its great variety.
“Dai Kanwa Jiten (大漢和辞典)” is said to be the most comprehensive Kanji dictionary published in Showa Era of Japan. It contains whopping over 50,000 Kanji.
Of course not all of them are frequently used by contemporary Japanese people. But the government as of now selects 2,136 Kanji to be used by Japanese in their daily life, and probably a much more number of Kanji are being understood and used by them in books and internets.

This night I picked up some of Kanji for the two, and calligrapher Yagi Suigetsu wrote them down with the East Asian traditional style of brush and ink. 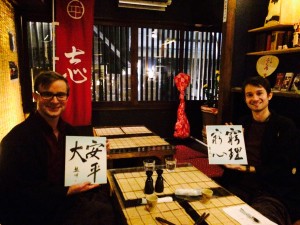 They read ”安平大 (An-Hei-Dai)”.
I picked up this phrase from “Lao-zi (老子)”.
Lao-zi is one of the most important ancient Chinese classics. It was written over 2,000 years ago. It dictates how to live our lives peacefully, as well as how a human society should be governed. Lao-zi’s philosophy should have an influence on ancient Japanese people’s way of thinking, just as Buddhism and Confucianism.

“安(An)” roughly means “secure” or “pacified”.
“平(Hei)” roughly means “not having a disturbance”.
“大(Dai)” means “great”.
They have all fortunate meanings. In Lao-zi “安平大” is referred to as the state of the peace.
Three Kanji are so fortunate that they are frequently adopted in names of Japanese places, and also names of Japanese eras called “Gengo (元号)”. For example, Kyoto’s ancient name was “平安京 (Heian-kyo, ‘peaceful city’)”. Contemporary Japanese era is “平成 (Heisei)”, and two eras back it was “大正 (Taisho. 大 can be read either as ‘Dai’ or ‘Tai’)”.

He says he loves the peace, so I and calligrapher Yagi Suigetsu chose three peaceful Kanji from an ancient great textbook.

Add to ”安平大” we also tried to express his family name in Kanji. It is “盤州 (Bansu)”. “盤” means a foundation / a bedrock, and “州” means an island / a territory. When I was told by him that names of his family members had a linkage with soil and rock, I was surprised by its coincidence. “盤州” can mean a solid land that can hold cities and people…! 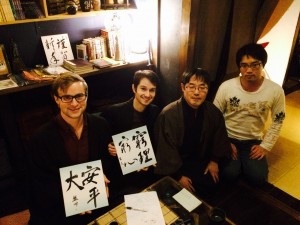 Meanings of each Kanji: “窮 (Kyu)” roughly means “ultimate”, or when used as a verb “to go and seek for the ultimate edge”. “理 (Ri)” roughly means “the reason” or more philosophically “the rule in the universe”. The combined word “窮理” can mean a concept of Chinese philosophy that indicates human kind’s efforts to grasp the ultimate rule of this universe. Pre-modern Japanese scholars adopted this word to translate the western concept of physics, so once it was called “窮理学 (Kyuri-gaku. ‘学’ means ‘science’)”. In contemporary Japanese it is called “物理学 (Butsuri-gaku. ‘物’ means ‘material’”.
And “心 (shin)” means “heart” or “mind”. Kanji of “心” expresses the shape of our internal organ that sends blood throughout our body.

I picked up the old translation for physics, and glued “心” together. It can mean “(Let’s) Go and seek for the ultimate rule of this universe, and at the same time the ultimate of our minds too.”

Lastly, we also tried to express his family name in Kanji too. It is on the last line in the left – “玄人”. It reads “Kuroto”. It indicates his name, but it also has a meaning in Japanese language. “玄人 (くろうと, kurouto)” means “a person of the dexterity / the skilled”…!

View all posts by: 小田光男

No comments yet. You should be kind and add one!